The Little Town of Leeds, Utah

We stayed at Leeds RV Park for several nights last week.  It was a home base to places like Zion, Quail State Park, and Snow Canyon.  It was an adorable town, one I would live at if I had to.

There is lots of history here.  There were 3 towns.  Harrisburg was built, then failed because it couldn't get water back in the 1800's.  Silver Reef was a boom and bust silver mine.  Leeds stayed because it had good access to water.  Leeds became a town on December 1, 1867.  It was first called Bennington, after their bishop, but he renamed it Leeds after the town of Leeds in England where he had been a missionary.

Just a short walk from the RV park is the Stirling Home.

William Stirling, a prominent and early settler of Leeds, came into what seemed, for the times, a fortune. Stirling, a farmer and winemaker, was also the chief executive officer for the Leeds Water Company. In 1872, on a cold winter day while riding his horse through Silver Reef, he observed that the Christy Mill, a five-stamp silver ore processing mill, was overheating as a result of the routine water supply freezing solid. An explosion was inevitable. He moved swiftly into action, opening head gates which directed water from the Leeds ditch system to cool the overheating mill. A disaster was averted. The owners of the Christy Mill demonstrated their gratitude to Stirling by placing him on the payroll with a handsome salary for a year with no expectation that he work for the wage. Stirling used the wage to build this two-story brick home. The Stirling home was built in 1876 by Samuel Worthen and Sons at a cost of about $5,000.     Found on a plack by the home. 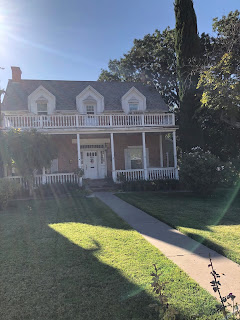 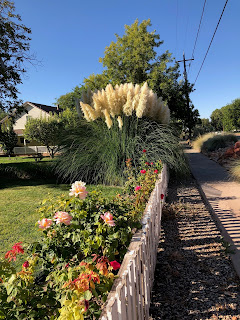 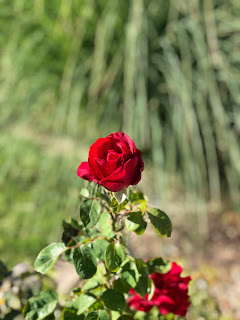 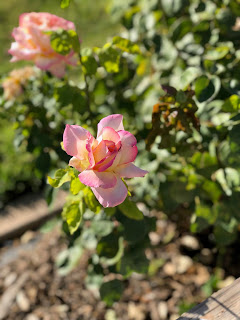 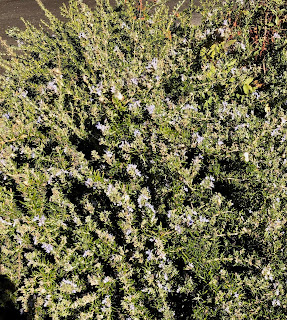 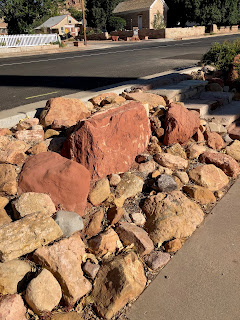 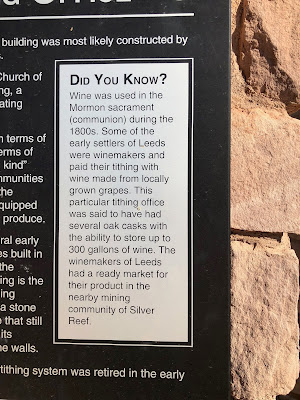 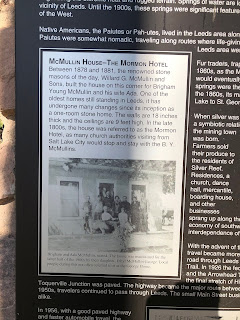 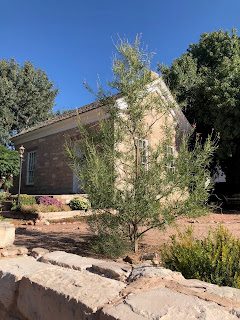 This was a private residence. 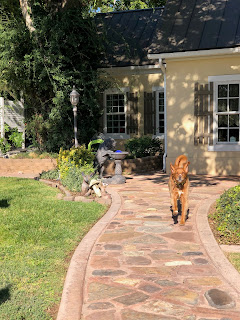 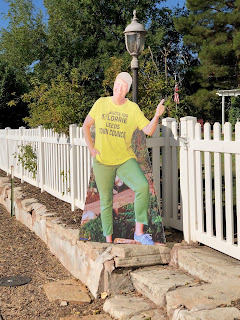 The above house was also a historical house.  This friendly lady and two dogs greeted me at the gate. Click on the picture with the dog to enlarge it and see the cute bird bath. 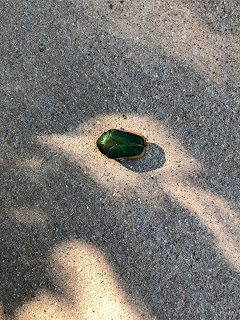 This blogging site makes it so hard to place pictures, sometimes they get in odd places.  The beetle in the above picture is first showed upside down.  When I turned him over he pulled in his feet like a turtle.  He was very shiny.  Probably not appreciated in this area. 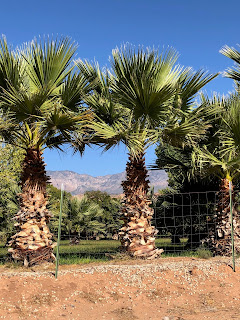 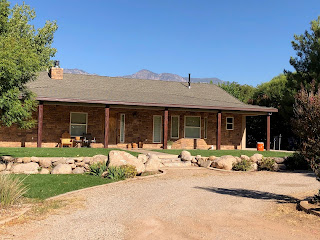 This house was my favorite in Leeds. 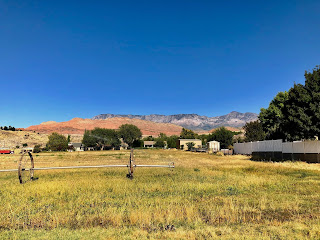 You all know how pictures just don't show how big and beautiful some sights are.  This was just a block away from our RV Park.  Farming fields and red cliffs.  So pretty and relaxing. 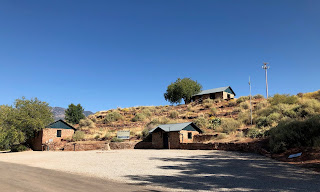 My walk this day took me to Leeds CCC Camp.  This was cool!  Young men got jobs, got paid.  Wish there were programs like this for young men.  I walked to the building that you see in the picture sitting on top of the hill. 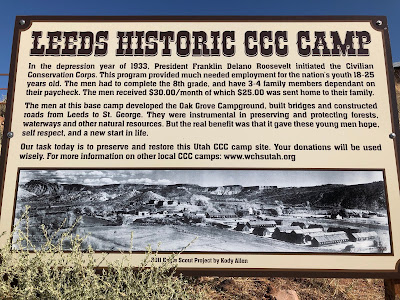 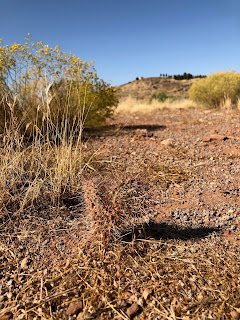 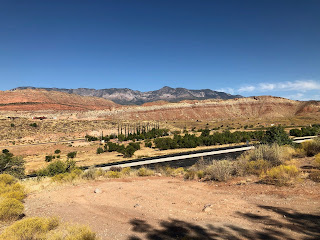 This is the view up top.  There is I 15.  The tall trees there are where a cemetery is.  Can you see the baby prickly pear cactus in the picture on the right? 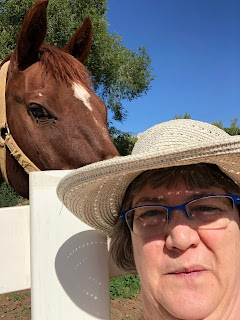 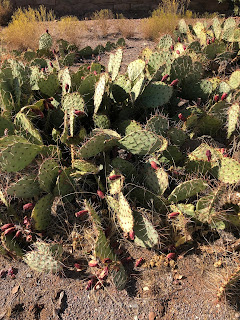 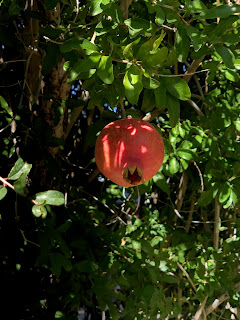 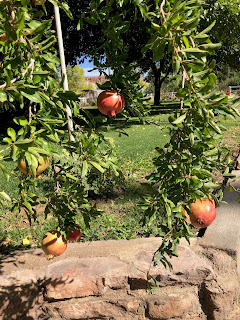 I believe these are pomegranates growing.  Never saw them growing before. 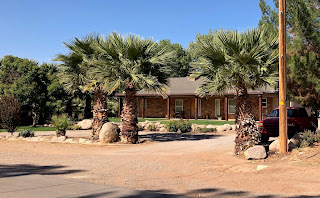 And my favorite house again.
This end my blog on Leeds.  I hope you enjoy it. 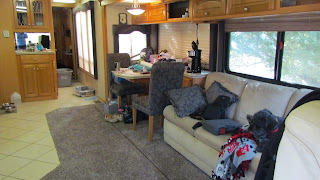 Hello Readers!  This is the first post of this year's Snowbird Trip.  I have changed the name of the post from Artie and Leinen's Grand Adventure to Machida's Meanderings, for two reasons.  One) we have added the cat, Ameena,  to our travels.  2) The animals aren't involved in everything we do.

As many of you know we are proud owners of a 2005 Mandalay 41' diesel pusher.  All the reasons why and how we came across this will be covered in a later post.  This post is to show pictures of the inside, and pics of a wonderful little garden I found.  First of all, our new home.


Here we are parked at Benson Fairgrounds.  We have power and water, but no sewer.  The picture above right shows the driver's side of the interior of our Mandalay Coach.  Things are a mess in this picture because I was in the middle of unpacking.  The carpet is new.
This is the passenger side of the coach.  No oven, but it does have a microwave/convection oven.  I'll have to figure that … 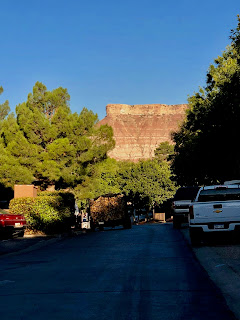 Hello Readers!  I hope you had a chance to look at the post on Zion NP.  If not, go back and see it!

This post covers the two days we were in the Lake Powell area.  We had the good fortune to be still hanging out with our good friends, Dom and Martha, plus new friends John and Renee.  This time we were at the same RV Park, and were all beside each other.  What a view!  You know how cameras just can't capture grand views, well, this was like it.

First a few pictures of leaving the Zion area.  Below is the view I had walking the dogs every morning.  To the right is one of the many buttes we see driving along this part of Utah.  So pretty.


Driving in the red rock areas of the country are really beautiful to me.  The picture on the left was my first view of Lake Powell.  WOW. This flower is from the desert willow.  From the Picture This app; "Ranging from 4.9 ft to as much as 26.2 ft in height, it can take the form of a shrub or small tree.  This is called a willow becaus… 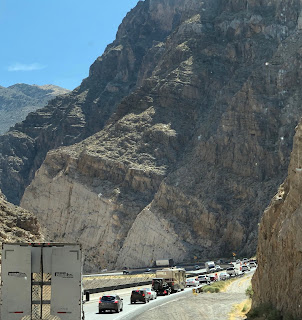 After the visit to Zion with Tim and Alyssa, Richard and I stayed in the Las Vegas area for a week.  I took pics, but I'm not putting them here.  Zion's hikes were much more interesting.  This time we glamped at a nice RV park we had stayed at 2 years ago.  Our very good friends, Dom and Martha, stayed in Zion park with her cousin and his wife.  Our new friends are Renee and John.  We took two days to hike the canyon.  The first day we went all the way to the hike that leads to the Narrows.  It was a great day for hiking the Narrows with the bright sunshine and no chance of flooding.  BUT you needed water proof boots and clothes because the water to hike through was near freezing.  Richard and I joked how we will be hiking Angel's Landing.  I'd really love to do it, maybe in a year......